With Philadelphia just 20 minutes from Rowan University, we have easy access to amazing sports complexes. This includes being able to go see the Phillies, Eagles, Flyers, Union, and some others. And I fortunately had the chance to attended a Union game, Philadelphia’s professional soccer team, with my dad and best friend. 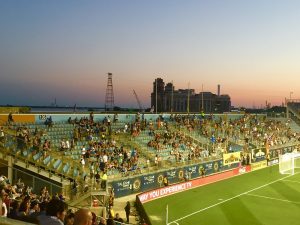 The Excitement of first arriving, hearing the fans cheering, and smelling all that delicious, greasy food gives you that exhilarated feeling that gets you “pumped” for the game to begin. Of course, being such a big food lover, my initial instincts were to get my first meal of the night. My friend and I decided to get some slices of cheese pizza and then traveled over to another concession stand to get the well-known Chickie’s &Pete’s crab fries. After retrieving our first wave of food we went to go find our seats so we could begin enjoying the game. We had the perfect view, overlooking the whole field and being able to see the entire stadium.

The first kick shortly happened after we found our seats and the first 45-minute half was very intense with both side scoring. However, prior to the start of halftime the opposing team, the Swans, took the lead bringing the score to 2-1. In between halves I had to get some more food to comfort myself, being that the Union was losing, so I decided to get some more crab fries. They’re just too good to pass up! The second half of the game was soon under way and the excitement of the Union possibly winning started up again after they had made a goal about 15 minutes in.

The last 10 minutes of the game became incredibly intense with both sides struggling to make that last goal to win the game. Had me on the edge of my seat, practically falling off. In the end, though, it became a tie, but it was an amazing game that I really enjoyed. The best part is that tickets for a Union game can run relatively cheap, and for us college students that is certainly an important factor. It’ll definitely be an activity I plan to do again.