Today we speak with Dean A.A. Mason, a senior music major from Vineland, Cumberland County, who rents an apartment off campus and commutes to Rowan. Dean will share his #PROFspective with us on what it’s like to be a Rowan University student and how he’s getting the most out of his college experience as a Rowan Prof. 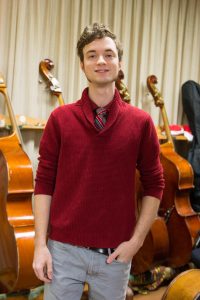 Do you work on campus? If so, where/what do you do? I’m currently an Orientation Assistant for the Office of Orientation and Student Leadership Programs

Do you have an off-campus job? If so, where/what do you do? I’m a sales associate at the Express (a clothing store) at the Deptford Mall.

Why did you choose your major? I first became a musician around the time I entered high school, having picked up the guitar in the winter of my eighth grade year. By the time I was a sophomore, I felt that music was my destiny, as it fulfilled me in a way that other academic subjects never came close to doing. I expanded my horizons as high school went on, taking my first courses in music theory and beginning to play the contrabass just before I began my senior year. I eventually took a liking to other subjects as the student in me grew, but music always remained as what I felt was my primary calling. I entered college as a music composition major due to my fascination and facility with music theory, but years later added a dual specialization in classical music performance upon being instilled with a proper musician’s work ethic by my current contrabass professor, Douglas Mapp.

One reason why you chose Rowan? When the time came to transfer out of my community college (that is, when I received my A.A. Degree), I applied to two different universities. While I was accepted to both, my audition and interview at my other option left me with an overwhelmingly negative impression of the school. This, contrasted with the warm welcome I received at Rowan, made it obvious that Rowan was where I belonged. 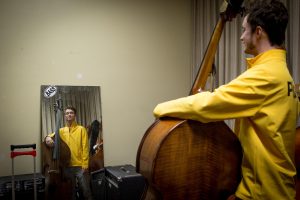 My Typical Day as a Rowan Student

The task of sketching out a typical day in the life of a music major is an interesting one, as we often find ourselves eschewing an ordinary daily routine in favor of the unpredictable schedule of obligations that a major such as music often entails. However, if I were to make an attempt at it, my typical day would begin in the early-ish hours of the morning. Obligations such as music ensembles and rotating courses at odd times usually necessitate me to take a couple of morning classes per semester, not to mention Friday classes, and thus an average day for me would have me waking up a bit earlier than I like; perhaps around 8:30 a.m. if I have a 9:30 a.m. class (or 7 a.m. if I have an 8 a.m. class). I always try to eat breakfast, even if I have to grab a granola bar or something, because I feel that breakfast is an important part of self-care. I can get dressed and be out of my apartment in as little as 15 or 20 minutes after I wake up, which is nice.

I spent last semester riding my bike to class, but this semester I’m driving. Getting to campus in the morning is nice, because I can find a good 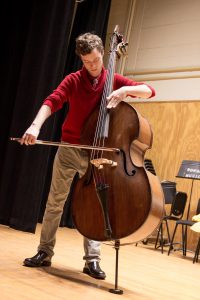 parking spot. I’m usually about ten minutes early to class, the class in question being Choral Conducting I in this case. Conducting class is always cool because it forces you to get out of your comfort zone while learning an extremely complex, physical skill (conducting is the act of physically directing a musical performance). After my morning class is done, I’m likely going to have a break before my afternoon class. If I have enough time, I might go home and eat lunch or nap, but more often than not I will stick around on campus and practice.

If you were to ask 50 music majors what a good amount of practice time in one day is, you’d get 50 different answers; I myself try to get 2.5 to 3 hours in a day, and I have to break it up into segments in order to remain focused, so I’ll practice for around an hour and a half after my morning class. After that comes my afternoon class, which in this case will be Form and Analysis, where we take an in-depth look at the compositional makeup of some representative works in musical literature.

One afternoon out of the week, after my afternoon class is done, I will generally go to the 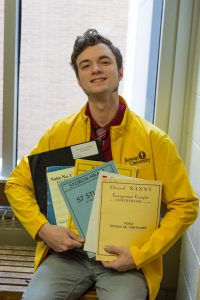 gym at the Rec Center with my gym buddy, without whom I’d never ever make it there. A trip to the gym takes a little over an hour, after which I will drive back to my apartment and eat dinner. As nice as it’d be to relax at home after this, my evenings are almost always booked. After I eat dinner, I might be closing at my retail job, which will generally take me late into the night before I finally get home. If I don’t have work (or PROS training!), I might instead have a night rehearsal, which also tends to go pretty late. Orchestra rehearsal can be surprisingly demanding, especially given the fact that my section is the only one that pretty much has to stand for the entire rehearsal (our instrument, the contrabass, is six feet tall). Being principal of my section also means that I need to focus and be on point as much as possible so that I can help keep the rest of the section together.

After all of that is done, I will often try to get in another hour or two of practice; it’s during this time (and only during this time, usually) that I’ll drink some instant coffee that I brought from home in order to stay focused. I’m generally in bed between midnight and 2:00 a.m., though if I spent less time goofing off on social media, I could probably be getting to bed earlier!