Today we feature Alex Walpole of Burlington County, a student in the M.A. in Strategic Communication program through Rowan Global. Alex, a retired Air Force officer, shares his military transition from active to civilian life, his goals and challenges as a Strategic Communication student and the unconventional way in which he discovered Rowan.

It was a comic book shop that first drew Alex Walpole to Glassboro’s Rowan Boulevard and, later, to Rowan University.

“I found my comic book store, and walking around the campus, I realized, this is a really beautiful area, and a lot of good places to eat. I looked it up. And I was like, they have an excellent master’s program in the field that I’m going for in strategic communication. So yeah, that’s what led me here,” Alex says.

The nonlinear path is woven throughout Alex Walpole’s professional and academic career leading up to his working toward a master’s degree through Rowan Global.

Alex can trace his cell phone number back to Colorado, just one of many states he has crisscrossed and lived in as a child of a military family; his mother served for more than 20 years. He pushed against a military career for himself. But a slow economy coupled with too many questions of “What are you going to do with your life?” propelled Alex to enlist in the Air Force at age 23. He says it was a decision he doesn’t regret for a second.

As an Air Force military police officer, Alex provided defense for military aircraft that landed in hostile areas around the Middle East. He served two tours in Qatar and Kuwait, respectively. During his enlistment, Alex was stationed locally at Joint Base McGuire–Dix–Lakehurst. He met and then later married his wife, a nurse at a South Jersey-based hospital.

The month their daughter was due in 2019, the military gave Alex orders to move to a colder, more remote location in the U.S. Alex says “it was not really anywhere you want to raise a family.” He also thought of his undergraduate degree in mass communication, for which he had earned on a swimming scholarship before the economy stalled. He chose to enter civilian life in what is known as separation from the military. Alex decided to plant roots, raise his family in South Jersey and enroll in the M.A. in Strategic Communication program at Rowan.

“After having a child and going through COVID … my best opportunity now is to use the GI Bill and finish my master’s degree — and to try to kick some butt and to find a job that I want to do with my life. That’s what I’m here for, and that’s my ambition,” he says. 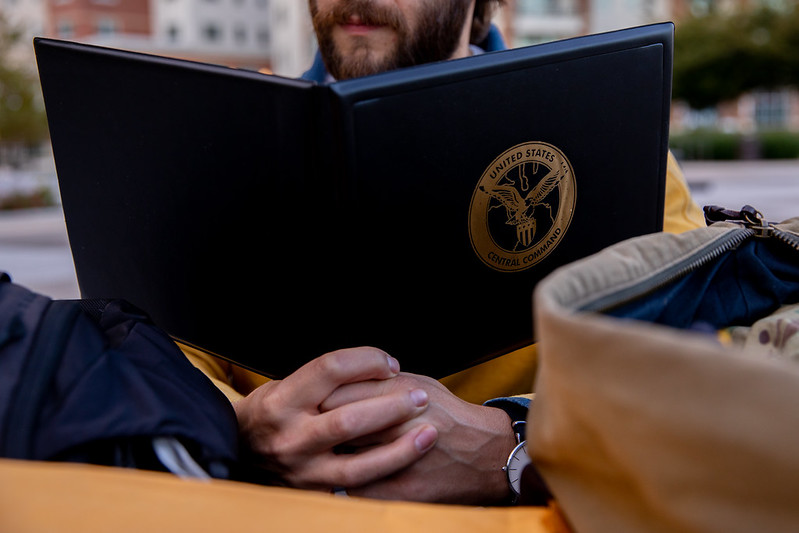 Alex sees that his decision to join the military could be viewed as “the most difficult to swallow, that not a lot of people are willing to accept, just as not a lot of people want to go back and get their master’s degree.” He draws parallels to these choices, noting his thesis is a daily challenge for which he wakes up every day and motivates himself.

“I put a lot of weight in getting my thesis approved this year because this is the hardest thing I’ve ever worked for academically. I’ve never written a paper that needed the kind of sources or research that I’m doing. This whole thing has no room for less than my best at what I’m learning,” he explains.

He says foundational courses like Strategic Writing I and II have impacted him for life, though he took some lumps early on. On his first graded assignment: “The whole thing was red. I mean, it was more red than it wasn’t. And so that learning curve, and just making me realize that I can really sharpen up, clean up, condense and make my messages more presentable, will help me with emails and anything else I have to do forever.”

Between caring for his daughter and taking classes, Alex signed on to a marketing communication internship with a Camden County food pantry for the following semester. His big dream and career goal is to represent a large organization as its spokesperson, conveying key messages to stakeholders. Alex draws energy from public speaking and talking to large groups of people, which he realizes is against the grain but may work in his favor.

“It’s almost like a strength like, well, if you pick up something that not a lot of people like to do, and you run with it, and with a smile, you might get somewhere. That’s what I’m figuring out. I might get somewhere with that,” he says. 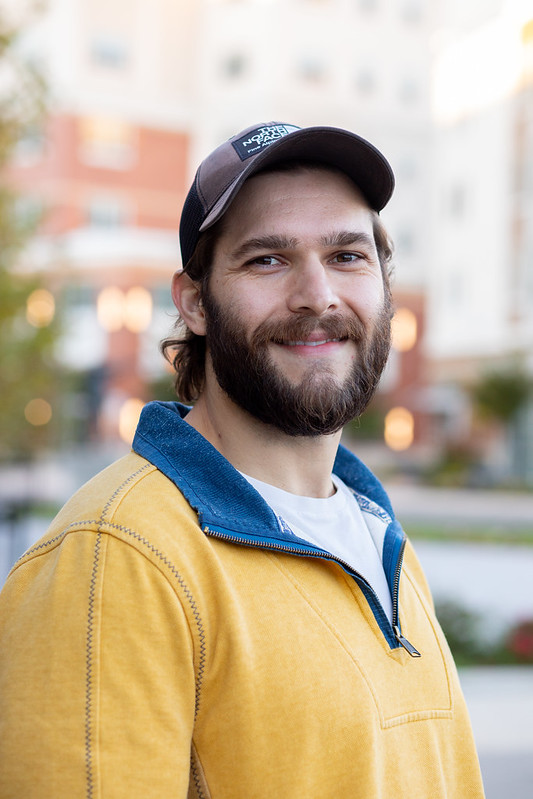 The military was, for Alex, the best decision he ever made. Though he is no longer active, the missions and experiences of the seven years he served stay with him. He says they can’t ever be replaced, and he loves that. He also speaks of a universal takeaway, one he applies to his civilian life and future career: people are people.

“The human condition is the same. People act out of love, and they want to be respected. And if you treat people with kindness, then you know, that’s all anyone could ask for. So that’s what I take from that, and that’s how I would relate that to my strategic communication field. I’ll take that with me,” he says.