Today we feature Byron Bustos, a 1999 graduate of Rowan’s Political Science program. Originally from North Jersey, Byron details his journey to Rowan, how he joined his fraternity and how it led him down a path he didn’t know he’d be taking.

When did you graduate from Rowan and what clubs, organizations or activities were you a part of?

I graduated from Rowan University in spring of 1999. I graduated as SGA [Student Government Association] President. I was also a resident assistant, and I worked with the Admissions Office as an Ambassador. I was in the United Latino Association, a member of my fraternity Lambda Theta Phi, BOCO which was the Borough of Cultural Organizations, the student activities board, the Political Science Association, Rowan Christian Fellowship, and Greek Council. I’m sure I was involved in other things throughout the years, but that’s what I can remember.

What have you been up to since graduating from Rowan?

Right from Rowan, I went straight to grad school at Seton Hall University to get my master’s in Public Administration. I got my undergraduate degree in Political Science so I knew I wanted to work in the government but I didn’t know which aspect of it. I was also contemplating becoming a guidance counselor since I got my certification in Secondary Education at Rowan as well. After Seton Hall, I was offered a job in DC with the Office of the Inspector General for postal service. I did 19 years with that agency. This past January, I was promoted to the Director for the General Service Administration of the Office of the Inspector General (GSAOIG) .

I became the national president for my fraternity. I then became the executive director for my fraternity. I was elected to be the President of the school board in my hometown of Passaic, New Jersey. I’ve been involved with different cultural and political organizations as well. I started the New Jersey Young Professionals Organization. Then I moved to Maryland about five years ago, and I’m just as busy here. I’m currently the president of the Homeowners Association.

I also started the Urbana Latino Festival after feeling like I needed to do something cultural in my community. We just had our fifth celebration recently. Other than that, I got married, had two kids, a dog and a few houses.

Did you always have plans on attending graduate school after college or was it just something that you happened upon?

I didn’t know I was going to be going to grad school until I was a senior and that was exposed to me. Mind you, I was the first person in my family to go to college, so college was all new to me. I didn’t have anyone to show me the ropes.

Senior year, I knew graduation was coming and yet I was uncertain about what I was going to do. I wanted to be a guidance counselor, but back then, it was required that you had to become a teacher first. So I got my certification to teach. But, just like everything else in life, there was a crossroad. An opportunity arose for me to go to Seton Hall. Going to grad school gave me more time to think about what I wanted to do with my life.

What was it like being a first generation college student?

The only reason why I went to Rowan was because, back then, Rowan sent buses to North Jersey to communities like mine that would bring high school students down to Rowan to expose us to something that we otherwise wouldn’t have been exposed to. We were able to apply right on the spot. Without that, I would have never been exposed to Rowan since the only colleges and universities I knew were the ones around me in North Jersey.

Were you always super involved as a child?

Were there any classes you took or professors you met that you felt helped you achieve your success?

I can’t pinpoint to one specific professor, but in my last semester at Rowan I did student teaching. Although I never fully taught a classroom after I left Rowan, I still had my certification in teaching, which helped me when I became elected to the school board. I had perspectives on [questions like:] What are pedagogies? What is it to teach the curriculum? What is it like to go through the training and be able to have students in front of you? Those things were all crucial to know.

How do you feel being a member of Lambda Theta Phi and the United Latino Association impacted you?

If I didn’t have the United Latino Association while at Rowan, my years would not have been as fruitful or as fulfilling. If I didn’t have Lambda Theta Phi, I don’t know what friends I would have carried on from college. I don’t know what my future would have been like if I wasn’t so involved in my fraternity. I was able to build a great network with both of the organizations. They really shaped a lot of who I am and I helped to shape them as well, so it was a two-way street. I’m glad I had them.

Did you have plans of joining Lambda Theta Phi or was it just something that happened?

When I was a freshman, my family’s attitude was very much: “No, you’re not joining a fraternity,” which, at the time, I didn’t care much about anyways since I didn’t know much about fraternities. However, my sophomore year is when my perspective started changing and I became more open minded. I went to a meeting, heard about it, learned about it, and did my own research.

I learned what the members were doing and how they were giving back to the community and what they were doing for the university, which really propelled me to say, “This can be a way for me to do more of what I want to do, which is advocacy, motivation and trying to get others to change things.” What better than joining a cohort of like-minded individuals?

What was it like going from just a member of Lambda Theta Phi to becoming the National President, then the Executive Director?

It didn’t happen overnight, but I was heavily involved during my undergrad, which propelled me to going to the regional meetings. After that, I would go to the national conferences, which exposed me to the organizations and the leadership, which allowed me to join the alumni board. Getting so involved just propelled me further and further in the organization.

With the fraternity, I wasn’t in favor of a few things and thought things could be improved. So I decided to run for national president to be able to create change from the top down. I didn’t go through the normal process to become the head person, but that’s just the way I am.

Do you feel like fraternities and Greek life in general get a bad rap which deters people from joining?

Definitely. Fraternities and sororities provide more good than what they get credit for. Many times, the media focuses on the incidents that occur rather than the greater benefits that Greek life provides to the campus and the community overall. It’s a disservice to the legacy of those organizations, some that have been here for hundreds of years, to have that legacy erased in a moment.

How do we get minority students more involved in Greek life and make them aware of the fraternities and sororities that are made for them and by them like Lambda Theta Phi?

It’s a catch-22 sometimes. I don’t know if the university needs to shove in people’s faces per se but I think it just depends on the student and what the student wants to be involved in. All the university can really do is make sure that these organizations are available.

Going back to something we discussed earlier, do you care to tell us a little bit more about the Urbana Latino Festival?

When we moved down here to Maryland, we quickly realized that there was a need for a little bit of music and more diverse events. My wife and I decided to put the event together and, within a day, the RSVP was sold out which no one expected. Five years later, we moved it to a different location and had over 600 people attend.

There’s vendors and different food trucks. It just has really blossomed into a beautiful thing. We’ve added more diversity and exposure to what it means to be Latino and everything that comes with it. 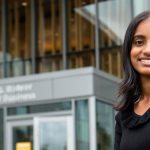