Meet Jamal McPherson from Swedesboro, NJ (Gloucester County), a junior majoring in Radio/TV/ Film (RTF) at the Ric Edelman College of Communication & Creative Arts. Jamal is a first-generation college student who loves to get involved in the community and try new things. Last year, he was appointed to the town board committee in Swedesboro. Today, he will share with us his journey to getting appointed and his experience so far at Rowan University.

Before coming to Rowan, Jamal first attended Salisbury University in Maryland, where he was a political science major and football player. Jamal has always had a passion for video production, so at Salisbury he joined their sports media production team, but eventually decided to transfer. 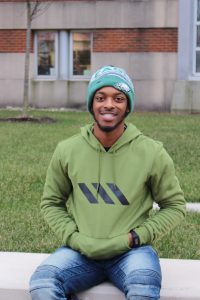 “What I was looking for was not at Salisbury, Maryland. Don’t get me wrong — I had a great time, but sometimes having a great time doesn’t mean you’re being productive,” Jamal says.

When Jamal decided to transfer to Rowan, he also switched majors. “My dad used to wrestle professionally in his day, that is why I’ve always had an interest in sports entertainment,” he adds.

While being back in his hometown, he saw a few vacancies in the board committee. He decided to apply, and he got the job. He is currently a member of the Parks & Recreation Committee and Economic Development Committee.

“I looked at the requirements and I emailed them saying I had great ideas. I joined last year, and I took an oath of office … They are a great group of mentors and they understand that school is first.”

Being a part of the committee is a four-year commitment; after Jamal’s contract is over, he isn’t sure if he will continue pursuing government committee positions. He recently started his own company called Aniville, where he plans concerts and festivals. 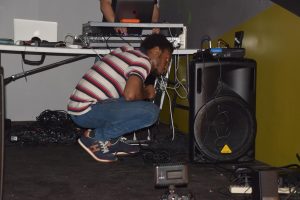 “Right now, I do concerts for my company Aniville, that’s what I’ve been working on lately.  I had a show in the Pfleeger Concert Hall in October, called ‘Aniville Jam’ and I had a show in Philadelphia over the summer too, it went pretty well. After the show it opened a few doors for me.”

Jamal thinks Rowan does a great job in making sure everyone brings their A-game wherever they go, and he thinks the staff at Rowan University are exceptional.