Bill Moen, class of 2009, has always had a desire to serve his community. As the son of a Vietnam veteran and the grandson of two World War II veterans, he originally came to Rowan to pursue a career as a state trooper. But the Runnemede, NJ native (Camden County) quickly realized his passion was not enforcing the laws, but rather creating them. An internship with his local congressman and an introductory American Government course at Rowan opened his eyes to the political science major, and his studies took off from there. “I’ve always had the political bug in me,” he says, “I served as class president in middle school and the youth mayor of my hometown growing up.”

Beyond the classroom, Bill was a leader other places on campus as well: he spent three summers as a Peer Referral and Orientation Staff (PROS) member, became the Senate Chairman of the Student Government Association (SGA), and founded the Rowan Democratic Club. After attending a Young Democrats of America convention in Dallas and completing a few internships in politics, the first generation college graduate wanted to “identify other like-minded people who were interested in the same topics,” to make a real difference. The club — which still exists at Rowan today — encouraged campus activism and hosted debates for candidates pursuing offices within the Student Government. “We worked hard to build the Rowan Democratic Club up, and I am still close friends with some of the members and co-founders of the club to this day,” Bill says.

His days as a Prof, before heading to the University of Pennsylvania for a master’s in public administration, are highlighted by memorable role models and mentors. “I owe a lot of my success to the positive figures who guided me at Rowan, and provided the resources and opportunities to end up where I am today,” Bill says. He recalls Dr. Bruce Caswell and Dean of Students Richard Jones as two of the most influential faculty that guided him throughout his undergraduate years. Dr. Caswell provided wise career advice and knowledge in political science, and Dean Jones “served as a mentor, taking me under his wing during my senior year,” says Bill. “Those first few steps I took beyond graduation were definitely shaped by the people I met on campus.”

As one of the faces of Rowan’s Rising campaign, Bill is not only a notable alum, but a role model for students — especially those interested in political science. He is currently the Southern New Jersey Director for U.S. Senator Cory Booker, and has worked for Booker for over five years. Bill’s experience accumulated through years of hard work and passion to get him to this coveted position. He began his career through internships and jobs with local legislators such as Senate President Steve Sweeney and U.S. Rep. Donald Norcross. He used those experiences to run for office himself, being elected in 2015 (and re-elected in 2018) as a Camden County freeholder, where he has served in that position for the last three years. Moen recently announced his candidacy for the  New Jersey State Assembly (5th Legislative District). His career has been a steady growth since college, one that is admirable in the eyes of his past professors and current undergrads.

How did Bill pave his way from undergraduate student to successful politician? One word: internships! “Use the time you have during your undergraduate years to pursue as many internships as possible,” he says. “They provide the opportunity to focus on your interests, and help narrow the scope of where you want to be when you graduate. There’s an expectation that you need to find your dream job after graduation and stay there for the rest of your life. That pattern is not as common as it once was. People are jumping at different jobs and opportunities to work their way up to the end goal.”

Bill Moen’s accomplishments are just one example of the value a Rowan political science degree can have, and how far it can take you! 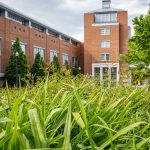