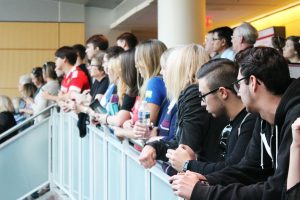 This donation is the largest ever from Rowan alumni and the second-largest in the university’s history.  In honor of the Edelmans’ generosity the park will be named the Jean & Ric Edelman Fossil Park at Rowan University. This is not the first time the Edelmans have given to Rowan. In 2002, the couple donated $1 million to improve the Rowan’s planetarium, which also bears their name.

The Jean & Ric Edelman Fossil Park will include a visitor center, museum, fossil preparation lab, nature trail, paleontology-themed playground and a special events place, featuring the emerging green and sustainable technologies. Anyone can visit the Jean & Ric Edelman Fossil Park by submitting an online form here. Keep in mind that the available spots fill up almost immediately. Whether you are an undecided major student or just someone who wants to touch the magnificent world of science, the Rowan’s Fossil Park is a great place for everyone to explore. 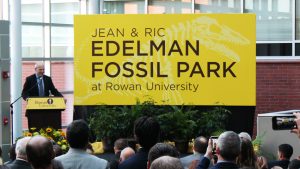 “[The Edelman] gift will allow the construction of a visitor’s center and museum that will feature the amazing creatures of the ancient South Jersey, such as: dinosaurs and mosasaurs, crocodiles, sea turtles, sharks and many others,” said Dr. Kenneth Lacovara, a world-renowned paleontologist and a founding dean of the Rowan School of the Earth & Environment. “Currently we have 200 school groups on the wait list who would like to visit the park. So, we know that there is incredible thirst for these authentic hands-on scientific experiences, and [the Edelman] gift will make it possible for [Rowan] to bring so many more people to the park. ” 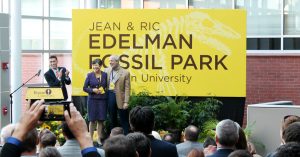 “We are excited to partner with Dr. Ken Lacovara to build a world-class museum and visitor’s center that will serve for generations to come,” said Jean Edelman, a Rowan 1981 graduate. During her college years, Edelman became a distinguished senior and the first woman president of the Rowan’s Student Government Association.

Have you already visited the Jean & Ric Edelman Fossil Park? If so, let us know what you enjoyed most about your visit!