The introduction of Discovery Hall sees the entrance of a new public art sculpture on Rowan’s campus. Today, we speak to two students who took part in its installation.

This summer, two Studio Art majors — senior Liz Kenlan and recent graduate Jon-Erik Hem — were offered the chance to leave an everlasting mark on Rowan’s campus through the installation of Time Sweeps.

Discovery Hall will be open to the school’s general population for the 2021-22 academic school year. With the new building being described as a way for the university to expand in the STEM disciplines, Jon describes the Time Sweeps sculpture as: “The bond between man made and nature.”

Time Sweeps, located in the East Garden Courtyard at Discovery Hall, is an entirely stone sculpture of winding serpent-like unnatural shapes formed out of individually-placed rocks and stones.

Prior to its unveiling, I was able to sit down with Liz and Jon to discuss not only the installation of Time Sweeps but their experience in helping to bring it to life as well as letting me know what art means to Rowan.

Liz and Jon were both recipients of a paid internship that allowed them to work with Thea Alvin. Alvin is a stonemason and the designer of Time Sweeps.

“I learned so much from her, all about wall making and building,” says Jon. When asked about working besides Alvin, he adds, “It’s awesome to see someone working hard from the minute they get in to the minute they leave.”

Liz agrees with the sentiments about the sculpture’s designer, stating: “From the first time I heard her speak as a guest visiting my Public Art class I got this feeling that lingered with me the rest of the day that things were good and I was alive with artistic inspiration. I sincerely related to her character, motivations, means to make her work, and the connection between herself and the communities she worked in.”

Alvin was not the only person that Jon and Liz got to work with. According to them, they worked with two other students chosen to work on the sculpture from the Geology department as well as a number of professional stonemasons.

“We were immediately hands on with it,” Liz remembers about her first day on the job. “I thought we’d be getting these simple intern jobs but on the first day it was, ‘Oh no, go and start placing the foundation for the wall’ and we were just like what? We got to do the actual work that the masons were doing. I was shoveling gravel and carrying holders. The thing I did the most was smashing boulders. It was actually very therapeutic.”

Jon also spoke on the installation process and similar love of smashing things: “I’ve done a lot of construction work. I’m all about three-dimensional thinking and I’m all about swinging hammers and breaking stuff.”

The sculpture isn’t just a beautiful work of stone. As the name suggests, it’s also an interactive teller of time. There’s a spot under the arch that allows for a person to view the winter and summer solstice, adding an almost magical element to not only Discovery Hall but Rowan as a whole.

Though Jon and Liz remember the summer fondly, Jon spoke candidly about the representation of Rowan’s Art department and the community as a whole. 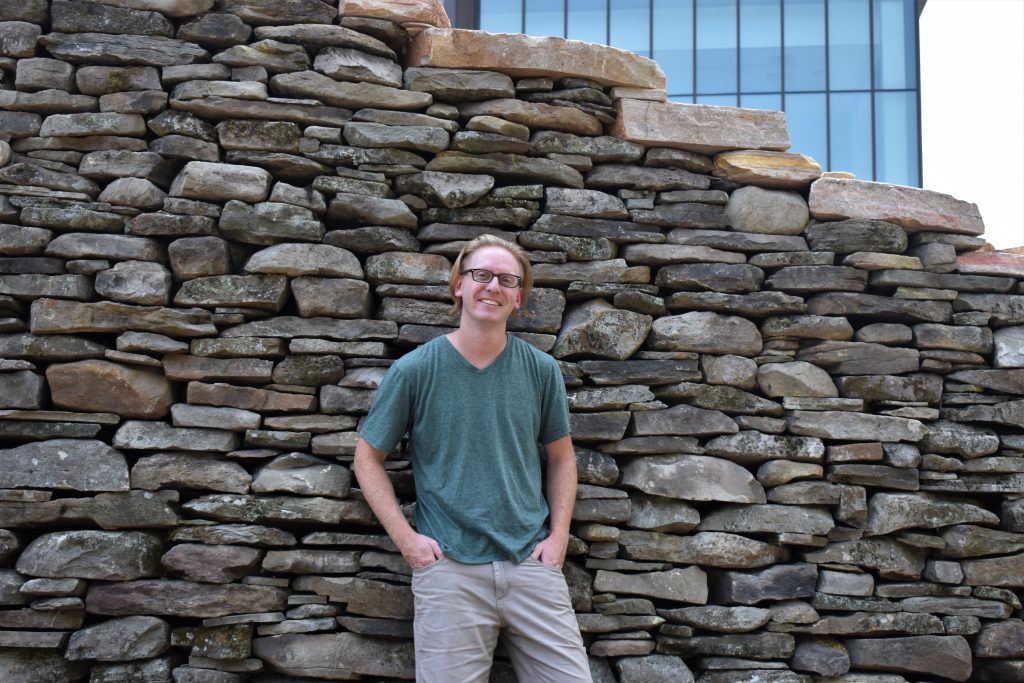 “More can be done to represent the Art Department here at Rowan,” Jon speaks openly. “They have good faculty, but oftentimes, it feels like many universities want a lot from their art students without giving them respect in return.”

Time Sweeps serves as not the physical embodiment of the hard work and dedication of Jon, Liz, Thea and all those who worked on it but as the tenacity of artists at Rowan as a whole.

“They want us to put paintings in the Business building or for us to do something for the medical building in Camden,” Jon told me as our discussion came to a close. “Everyone needs artists.”