Kathleen Gordy-Mathis, an alumna and current preschool teacher, tells us about her amazing experiences since graduating. Kathleen graduated with a bachelor of arts degree in Communications with a specialization in Public Relations in 1990.

What was your experience like as an undergraduate at Glassboro State College?

“As an undergrad, my experience was absolutely awesome. It was a bit of a culture shock for me because it was rural and something I wasn’t accustomed to. Deer and rabbits were basically escorting you across [Route] 322 to get to the Student Center.

Originally, I’m from Atlantic City and though there are casinos, to me [Atlantic City] is still a small town with big city money. To go from that to Glassboro, was very different. To me, there were enough students but there weren’t too many. It wasn’t overwhelming.

I chose communications because I like to talk and I love to write. Glassboro was known for being one of the best communications schools out there. [I chose Glassboro] because it was far enough away but yet close enough to go back home.

I learned, as a freshman, not to take 8 a.m. classes and to opt for 9:30 a.m. classes instead! It was an interesting experience trying to get up every morning and get myself to class. I learned to enjoy the moment and not to put too much pressure on myself. Though school was very serious [to me], I didn’t stress out about it to the point where I would make myself anxious or nervous. I truly enjoyed my experience at Glassboro.”

Can you tell us about your journey from graduation to now?

“In my senior year, I took the PRAXIS or the National Teachers’ Exam and I passed it on my first go-around. Right out of college, I was a substitute high school teacher for one year. Then, I worked for a nonprofit. Then, I went on to work for Computer Sciences Corporation as a corporate trainer, contracted with the FAA (Federal Aviation Administration). [I realized my passion for teaching in] becoming a corporate trainer, where you get to interact, facilitate and answer questions. You get the opportunity to see people’s thought patterns and mindsets. You have the opportunity to provide [others] with the tools to navigate anything.

I left the corporate sector to become a full-time teacher. I am currently a preschool teacher in Atlantic City. I love working in pre-K because they are willing to learn anything you teach them! They are so hungry for knowledge!”

Working with the FAA, Kathleen trained people in interpersonal skills, navigating change, proactive listening and teamwork dynamics. As a corporate trainer, she discovered her passion for teaching and became a full-time teacher in 2003. Kathleen has taught first and second grade, but loves pre-K the best. 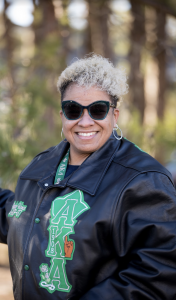 What do you remember the most about Glassboro State?

“Black History with Dr. Gary Hunter was very informative and his style caused you to reflect upon what was presented to you and what you had gained before going into his class.”

Kathleen’s memories of Dr. Hunter’s popular class on black history was also enriched by her experiences of pledging to Alpha Kappa Alpha in the same semester. For Kathleen, the most significant lesson she learned from Dr. Hunter was how to be a continuous learner.

What was your experience like in the sorority, Alpha Kappa Alpha (AKA)?

“I pledged as a freshman. So for the most part, my entire career at Glassboro, I was a member of Alpha Kappa Alpha. It was an awesome, life-changing experience. It gave me the opportunity to, not only network with sorors but also with other people in the greek family. They are lifetime bonds. [That experience] was truly worth it.”

Kathleen served as president of AKA and has been an active member of AKA for 33 and a half years (34 years in May)! She fondly remembers practicing for step performances in the kitchen of an Evergreen apartment. Kathleen’s solid sorority connections have continued to bring her skill-strengthening opportunities, such as mentoring Kathleen in her first permanent teaching job. She has had sorority sisters working by her side and cheering on her success.

Another fond memory Kathleen shares with her sorority sisters is the absolute elation they felt when Kamala Harris was elected Vice President of the United States.

Could you share a little bit about racial inclusion and the student culture while you were a student?

“We kind of stuck to ourselves, as far as like-minded people and groups that we were ‘a member of.’ We didn’t really venture outside of that dynamic. It definitely was not as diverse as it is now.”

Kathleen remembers being inspired by Herman James, the first African American president of Rowan, saying “he always went out of his way to make you feel welcomed.” Kathleen remembers protesting with AKA against Coca Cola’s involvement in South Africa regarding apartheid and against other social issues, whether local, national, or international. AKA made themselves known.

Kathleen’s time with the Black Cultural League helped share valuable information focused on the African American experience ranging from the nuances of college life or life post-graduation. Kathleen continues to be involved in the Rowan community, including Homecoming and the Rowan University Black Alumni Network (RUBAN) panel discussions which span the 80’s to the 00’s. She enjoys annual Homecoming tailgate parties and celebrating with lifelong friends.

Kathleen remains excited about the future of Rowan, knowing that Dr. Penny McPherson-Myers, her fellow soror and the Vice President of Rowan’s Division of Equity and Inclusion, works to make sure that the efforts in working with the student population are balanced and focused on providing the tools students need to be successful.

“[I hope] to see a continued level of diversity and also, what is needed to sustain it. As our general population changes, I feel that Rowan also has to adapt in order to properly serve those who come through its doors.”