Meet Jeff Wheeler, a freshman double major in Radio, Television and Film within the Ric Edelman College of Communication and Creative 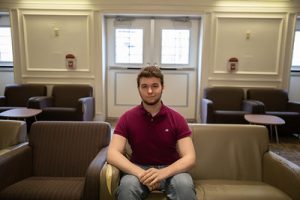 Arts, and Computing and Informatics within the College of Science & Mathematics – School of Health Professions. He has minors in Computer Science, Math, and Electrical and Computer Engineering. Jeff is a first-generation college student from Matawan, New Jersey (Monmouth County). He feels that Chestnut Hall is his home away from home. Today, he will share with us two things he loves about about living in Chestnut Hall, as well as his experience being President of Chestnut Hall’s Hall Council through the Residence Hall Association (RHA).

His floor community within Chestnut.  Jeff thinks that Chestnut has a great community, especially within each floor. “Moving into Chestnut was scary for me, I didn’t know anyone. However, my RA brought our floor together as a family and they turned into my major friend group. “His floor has become his best friends, and he thinks that being in the Computer Science Living-Learning Community helped group him with people that think similarly to him. He has been coding websites since 7th grade and became a freelancer in 9th grade, so computer science is his passion.

The Chestnut Community as a whole. “Talking to the presidents of the other halls made me realize how lucky Chestnut is with our close community. I feel like everyone knows everyone and they’re always looking out for each other.” Every time he walks around, he sees someone he knows and he is greeted with a smile. It makes him happy to know there is such a great Chestnut community. He says that everyone is respectful and kind towards the Resident Assistants and their fellow residents.

“Being President of Chestnut was a big game changer for me.” Jeff says that programming events has been a lot of fun. He had the opportunity to network with a ton of great people involved in housing and created some mentor relationships that made his freshman year memorable. His role as Hall Council President of Chestnut involves event programming and discussing issues around the hall that the council can fix, such as social issues or study issues.