A flooding laundry room, days worth of Chinese takeout and more, freshman Davon Dickson has had quite the experience dorming in Mullica Hall at Rowan University.

Davon, a freshman finance major, lives in a four-person suite in Mullica Hall. 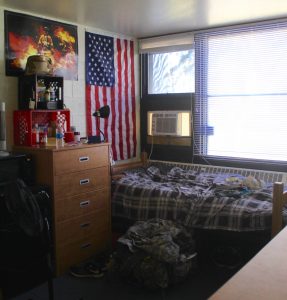 Here, he shares two bedrooms with his four suitemates, one of which he attended high school with. Mullica is one of Rowan’s smaller residence halls, housing 104 students.

Davon says his ‘side’ of campus is better for weekend activities. Though he isn’t as close to his classes as Chestnut and Mimosa students are, he enjoys this side of Rt. 322 better. He is close to the bookstore, restaurants, 7-Eleven and the Student Center.

On the weekends, Davon’s favorite thing to do is hang out with his hallmates in the Mullica Hall halls. Hanging out in dorm halls might not sound so glamorous, but these hallway hangouts have allowed the Mullica Hall residents to form a tight bond. 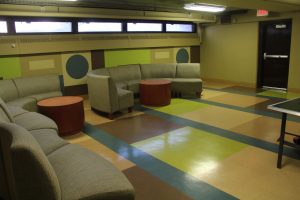 Together, they fill the hallway, stay up late and chat away, sometimes complaining about the “bowling ball people” that live in the rooms above them. They have even baked cookies in the Mullica Hall community kitchen for everyone to enjoy.

Usually, Davon and his hallmates love ordering Chinese takeout. Everyone gets something different, and together they have a college edition family-style meal in the Mullica Hall lounge or hallway.

“You know you order way too much Chinese food when the restaurant answers the phone and knows your name and order!” Davon jokes.

Hanging with his hallmates is something Davon says he will never forget, and these nights have become the highlight of his first semester at Rowan.

Another thing Davon will never forget is the first time he did laundry at Mullica Hall. 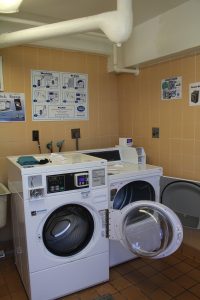 “The first time I did my laundry, I flooded the entire room with water and suds!” says Davon.

Davon left the laundry room after putting his clothes in the washing machine. When he returned, he noticed the floor was covered in bubbles. He ran to his room to call for help and realized he was locked out.

“That day went from bad to worse,” Davon said. “I had to knock on my RA’s door to unlock my door, and public safety had to come to fix the flooded laundry room.”

It’s safe to say Davon now only does his laundry back at home in nearby Logan Township (Gloucester County.)

Living in Mullica Hall has given Davon some of the best freshmen memories, no matter how embarrassing they might have been. The best thing about Mullica Hall to Davon isn’t the lounge rooms, ping pong table or being on the “fun side” of campus. But it is the opportunity he had to build such great bond with everyone in the community. 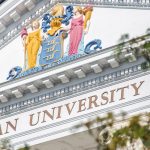 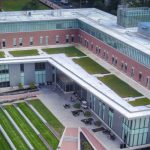