As North Jersey natives attend Rowan University pursuing a rewarding education, they can’t help but notice how different South Jersey is compared to their northern hometowns. From how words are pronounced to the food, there are many differences between the two regions. Below, we have organized a top ten list of reasons why students from North Jersey find living in South Jersey so different.

1) Sprinkles vs. Jimmies
Ice cream and doughnuts are something we all love, especially when topped with … sprinkles? Jimmies? North Jersey students don’t quite understand the dilemma, “I never heard someone say jimmies until I went to the Yogo Factory with my roommate freshmen year. She asked if they had chocolate ‘jimmies’,” says junior Tori Ramirez of Randolph, Morris County. South Jersey natives refer to these cute, little, rainbow candies as jimmies while North Jersey students insist they are called sprinkles. At least both sides can agree that sweet treats are delicious whether topped with sprinkles or jimmies.

2) People seem to move a little slower
Maybe it’s because they are used to the hustle and bustle of North Jersey that makes everything in South Jersey seem to move at a more leisurely pace. In North Jersey, it seems millions of people rush to the same place during their morning commute, New York City. But down here, the only commute most of us face is the commute to class.  As a North Jersey student here, I tend to speed walk my way to class, weaving in and out to pass those who probably aren’t from the northern part of the state like I am. The South Jersey approach is probably healthier for people’s stress levels and blood pressure.

3) …But not when it comes to driving!
The first time I drove to Rowan University from my hometown, Rutherford, Bergen County, which is about two hours north, I realized cars seemed to move significantly faster about an hour into my ride toward home. I was shocked that those drivers were just as aggressive and fast as notorious New York City drivers, who I try to avoid by using public transportation. I’m not the only one who has noticed the difference. Nicolette Giordano, a junior public relations and adverting major from Parsippany, Morris County, says, “People drive like crazy in North Jersey!” South Jersey drivers are definitely kinder. They drive closer to the speed limit and will let you merge onto the highway with a wave. 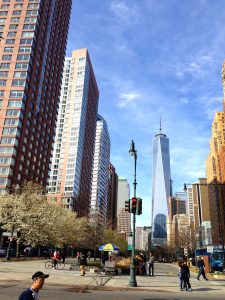 4) Sorry, Philly is not “The City”
Philadelphia may be the closest city to Rowan University … but it is in no way THE City. The real city to North Jersey students is New York City. They agree there is no place in America that can compare, it is simply one of the greatest, most diverse places in the world. So, when asked “Want to go visit the city?” North Jersey students assume you’re talking about the Big Apple. Brian McKenna, a junior communications major from Middletown, Monmouth County, thinks otherwise, despite his more northern roots. When it comes to comparing both cities, something Philly has that NYC lacks is local music, he says. “As someone who closely follows music, I think Philadelphia has better bands than any city in the world. And in my opinion, nothing coming from New York is as good,” says Brian.

5) Subs vs. Hoagies
There’s something about cold cuts, cheese, lettuce and tomato sandwiched in a roll that has sparked this debate. North Jersey calls them subs, while South Jersey calls them hoagies. There is no difference between the two but, either way, they always make the perfect lunch! 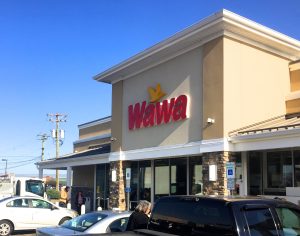 6) Wawa is everywhere
North Jersey students say they are pretty sure South Jersey residents can find a way to successfully live solely off Wawa. After seeing all that Wawa has to offer, I couldn’t agree more. Within just 20 miles of Rowan University, there are 50 different Wawa locations! There’s everything from coffee to toothpaste to customizable subs (err, I mean hoagies) available. North Jersey students’ hearts burst with love for Wawa, and we are actually pretty jealous there aren’t many local Wawas available to us back at home.

7) There’s a lot of open space
When us North Jersey kids were younger, there was nothing better than driving around and spotting some farm animals or a big red barn. Usually, in order to witness this “country magic” we had to travel for an extended period of time from our hometowns. But now, attending school in South Jersey means open fields and farms are just a couple minutes away. It feels quaint, yet we Rowan students still live near fun things to do when we’re living on or near campus. 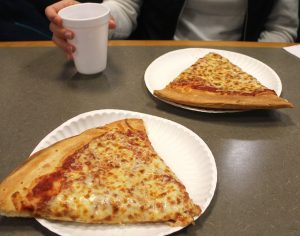 8) Pizza and bagels are just…not the same
There is nothing better than a North Jersey slice of pizza or bagel. North Jersey pizza has the perfect balance of a crispy, crunchy bite with a soft crust, while bagels are always fluffy and soft. When it comes to these two foods, North Jersey students can really tell the difference. Sorry, South Jersey, us northern New Jersey students may slip and start calling sprinkles “jimmies” but our taste buds will always prefer pizza and bagels from home. 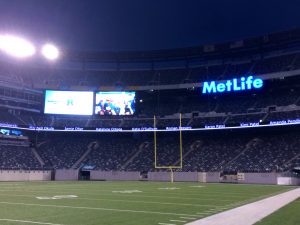 9) Sports teams
One thing North and South Jersey students can both agree on: New Jersey deserves its own football and baseball teams! Football and baseball are two of the most popular sports in America, and living in NJ forces us to choose between New York and Philadelphia teams. North Jersey fans choose to cheer for the Giants, Jets, Yankees and Mets, while most South Jersey sports fans remain loyal to Philadelphia teams, like the Eagles and Phillies. However, North Jersey students don’t let this divide stop them from rooting for their favorite New York teams alongside any South Jersey friends they have made at Rowan. Some North Jersey students even eventually root for the Philadelphia Eagles just for the free coffee at Dunkin Donuts after a Sunday night victory. At least we all root for Rowan Profs together!

10) Don’t even get us started on Taylor ham
The biggest debate between North and South Jersey students remains whether or not the ideal breakfast sandwich is called taylor ham or pork roll. Originally, the breakfast meat was called ‘Taylor Ham,’ but around the beginning of the twentieth century, the name was changed to ‘Taylor Pork Roll.’ Though the proper name for this breakfast sandwich staple is ‘Taylor Pork Roll,’ according to the primary manufacturer of the meat, North Jersey still stands strong, calling it Taylor ham.

Regardless of all these differences, Rowan University is what we all have in common. Being part of the Rowan community allows us to appreciate the diversity we encounter on a day-to-day basis, opening our eyes to the differences even within this small state that a majority of us all call home.